Back To The Old Homestead For A Visit 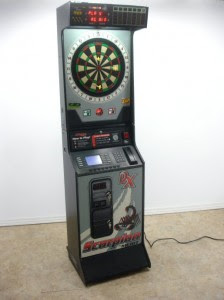 I'm off to visit The Weasel Den again.
First I am going to head down to the Eagles club and enter a dart tourney.
They put in one of those electronic dart boards and I have been brushing up on my mad skillz.
I used to throw a pretty damn mean set of darts back in the day and have won a few tournaments.
I have a buddy down there who's first name is the same as my last name and we look so much alike that people are constantly mistaking us for each other, it is pretty hilarious sometimes.
Come to find out, he is wicked good at darts also, let the fun begin.
I whupped his ass one game and he turned around and whupped mine the next, this is going to be fun.
After that, I might tackle the shitter in the Weasel Den again, joy, joy.
If nothing else, I am going to unpack some more shit.