Merry Christmas to all.

Well, now.
The repubs got their asses handed to them,finally.
I was starting to think there were a whole lot of completely stupid people in this country.Guess they finally opened their eyes and said,"Oh Fuck No!"
So, now that Leahy is already smelling blood and kicking off some (Long overdue) investigations, Who should get the first subpoena?Thats a tough one to call. Soooo many crooked motherfuckers out there.And before you start in, if there are some Dems in the crooked category,(you know there are) FINE. Clean them out too!This country is long overdue for a good purge.Maybe now there will be some accountability in the current administration.And maybe we can finally get back to being some decent people.
Posted by Phil at 2:34 PM 1 comment:

What, Cat got your tounge?

Little orphan Annie has been under investigation for the last nine months for allegedly casting her ballot in the wrong precint.
One source is reporting that she is not cooperating with the investigation.
Bitch needs a little jail time anyway.

By BRIAN SKOLOFF
Associated Press
Posted November 1 2006, 3:10 PM EST
WEST PALM BEACH -- Conservative columnist Ann Coulter has refused to cooperate in an investigation about whether she voted in the wrong precinct, so the case will likely be turned over to state prosecutors, Palm Beach County's elections chief said Wednesday.

Elections Supervisor Arthur Anderson said his office has been looking into the matter for nearly nine months, and he would turn over the case to the state attorney's office by Friday.
Posted by Phil at 3:59 PM 1 comment:

The Repubs are in melt down

The Foley scandal is a very big problem for the enemy right now.
The internal finger pointing and buck passing going on right now is awesome to watch.Omar the tent maker wouldn't have enough material to cover all the asses exposed on this one.It has been amazing to watch Repub spinmeisters try and pitch this back on the Dems. FUUUUUck you! You OWN this one baby.All yours.The possible cover up of Foley's predilictions and past peccadillos is the very bestest part.Even Soccer moms are pissed off about this one.And while Hastert is taking enough heat to jump start the sun, Stupie McFuckwit is praising him and doing the snuggle bunny dance. Outside. Inside he knows, somehow instinctively, that something bad is happening.Dumbass.Praisng people has led to bad things happening to said people. Isn't that right, Mr Heckofajob?
Posted by Phil at 4:19 PM 2 comments:

I voted, Have you?

Where I live we have mail in ballots ONLY.
None of this hack the vote shit.No hanging chads either.
The one problem ,so far, is that the new ballot is a two party primary.
You have to color in a box to declare yourself either Democrat,or Republican, so you can vote in the November election.
Apparently, people have been missing this little feature. Accordingly, now up to 10% of ballotts cast will be voided.
The only consolation is they won't be counted for Republicans as vote fraud!
Pay attention,Ohio and Florida.
Posted by Phil at 2:44 PM No comments:

Elections are coming up all across the country.

One thing I make sure to do is vote. That and pester everyone I know to do the same.
This year is critical for us progressives and the country as a whole. George Bush and his band of thieves has fucked this country up ,big time. The culture of corruption has to be exterminated.People who actually care about our great nation need to be elected into office, and some serious fucking justice needs to be meeted out to the criminals they are replacing.It is being floated that Democrats pretty much have a lock on at least one House.With a chance to take both Houses, possibly the demise of the fascist regime currently in power is near.
So get off yer butt an' VOTE!
Posted by Phil at 4:02 PM No comments:

Thank A Vet.
Happy Fourth of July.
As I type,the fireworks are going full blast.God bless the men and women, who at this moment, are giving their all for this country.
And God Damn the Bush administration.One and all.
Posted by Phil at 10:56 PM No comments:

Rape Gurney Joe Pissing Down His Leg
Joe Lieberman and his crew are currently flailing about trying to get his balls unstuck from the fence he's been straddling.After the commercial from Ned Lamont's campaign hit showing Lieberman spouting Bushes voice and the morphing into Bushes image, The Liebermeisters camp has come unglued. Shit or get off the pot,Joe.

Tip'o'the bald spot to C&L for this link to the commercial.

Cut and paste into your browser until I get more computer literate.
Posted by Phil at 4:54 PM No comments:

Is This Michelle Malkin's Puppy? 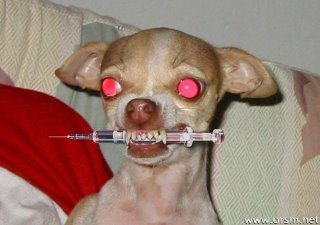 They say sometimes pets and their owners resemble each other.
Posted by Phil at 9:39 AM No comments:

I would like to give a shout out to someone near and dear to me. My DAD. Love 'ya man.

Go over and give him a hard time in regards to anything. He's new, he's green ,but he is a very intelligent guy.
he's been around the block, as they say.And won't disappoint when it comes to saying his piece.
Posted by Phil at 5:56 PM No comments:

Spring has sprung and the Turdblossum is in flower once again. Get the weed killer. Karl Rove has been , I don't know what he has been,Demoted? Supposedly the motherfucker has been demoted from any policy activities and is now focusing on the election coming in November.Still has his security clearance . How convenient. perhaps Mr. Patrick Fitzgerald may soon have something to say about that.If Rove has no policy clout , and is ,in fact focusing on retaining Republican power, Why in the hell is he still on the public payroll? Just a thought.
Posted by Phil at 5:48 PM No comments:

What a difference a day makes. Scottie resigned as the White house spokesperson.Related to the 'demotion' of Turdblossum,I'm thinking that the shit is getting ready to hit the fan in reguards to Rove's imminent indictment on multiple charges.Scottie stuck his neck out when the original accusations started flying about Rove's involvement in the disclosure of NOC, Valerie Plame.Bush said anyone in the administration that was involved would be fired. Scottie came out and said no one in the administration WAS involved.
Can you say "credibility"?, I thought so. Scottie? You are a tool.
Posted by Phil at 5:40 PM No comments:

I love my family

I am sitting here with my Dad right now, this is cool. I do not get to spend a lot of time with my family, so I like to think of this as special time.I have just introduced him to my blog. God bless him,called me to have a drink. I had a very nice chat w/ my grandma(92!) way cool.The old fart has a damn laptop w/ wi-fi and DSL in his house. How cool is that? Oh, BTW, Fuck you GW.
Posted by Phil at 8:54 PM No comments:

The Hammer Blames Me

Tom Delay(R Thug) announced this morning that he is stepping down from his Congress seat and will not seek re-election.
d
Delay blamed his long awaited fall on "Liberal Democrats". That would be me.His announcement came 3 days after his Deputy Chief of staff Tony Rudy pleaded guilty to conspiracy and corruption charges. Delay claims Rudy's guilty plea had nothing to do with his decision to drop out of the race.Delay was indicted last September on money laundering and illegal campaign finance charges.Delay was quite self assured when he claimed that Texas prosecutor Ronnie Earl was going to have his position taken away from him by the State Legislature.Mr. Dealy recently had his concealed weopons permit revoked as he is under indictment. Questions remain as to the reationship of members of his family in the investigation.
Posted by Phil at 10:23 AM 1 comment:

Not too many days left in the race for the seat vacated by Cunningham in California, As we all know, Cunningham is currently incarcerated for accepting bribes. In what has historically been a Republican district, Ms. Busby is currently polled at 45%. 50% being needed to avoid a primary. It would be a nice feeling to see a Democrat take a seat there.While the repubs are in charge of the ethics commitee, we will have to wait for more of the Abromoff testimony to surface before any justice can be meeted out in shining a light on the rest of the Party of Corruption.
Posted by Phil at 5:36 PM No comments:

Today Mr. Jack Abramoff finds out how long he gets to avoid dropping the soap in prison.Also where said prison is located. we can all hope that he has been singing like a canary, Ratting out the rest of corrupt buddies.Night Jack.
Posted by Phil at 10:29 AM No comments:

Ornery Bastard
If ,by some almost impossible chance, that someone stumbles upon this meager blog,head over to Firedoglake and chip in. They are having a campaign to send actual rubber stamps to our Congresscritters to point out their utter lack of oversight.I bought one, you should too. Her's the link.
http://www.firedoglake.com/
Go show Jane and Christy some love.
Posted by Phil at 4:39 PM No comments:

Well,They say a journey of a thousand miles begins with the first step.Seeings how I am pretty much computer illiterate, this is going to be a learning process for me.Grab a beer,kick back, and watch the horror show begin.
Posted by Phil at 5:01 PM No comments:

I had to start this blog to leave a comment on somebody elses blog. I will return later and leave some kind of raving lunatic rant about politics or something.
Posted by Phil at 12:47 PM No comments: