The fucking cat went MIA  two weeks ago without notice.
One day she was waiting in the driveway when I showed up from work like she had been for over a year, the next day she was gone.
My brother gave her to me after I was so sad my other one went MIA after she jumped out of my truck and was gone for two freakin' months until I got a call telling me she was across the damn street from where she bailed out.
In the mean time, me and Baby had some interesting times.

Me and the old woman cat had some serious go rounds and I have the scars to prove it, God Damn that little
bitch was mean. She didn't even have her front claws and she was twelve fucking years old when I got her. 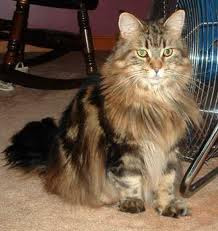 Imagine this cat ten years older with three times the amount of hair around her neck, a bad attitude and  razor sharp teeth.
When I first got her, living in the old Weasel Den, she disappeared for three days, I tore the place apart looking for her. She was holed up behind the duct works for the heater in a place I couldn't even see with a flash light.
God, did we go round and round.
Then the games began.
That poor thing got so stressed out, she started shedding her mane to the point I came home one day and thought a fucking squirrel had died under the table, I shit you not, it was the biggest hairball I have ever seen.

It took quite a while for us to get to know each other and I have to admit I thought about killing the mean little fucker more than once.
She was only mean because she was scared.

I had to work at it for quite a while but we finally called a truce at some point and she was a great kitty after that.

The poor thing had some kind of blood type the fucking fleas around here loved.
I kept buying the so called three month flea treatment and it would work for a fucking week. Lying sonsabitches, she just kept getting ate up.
Shit, I am still killing the little fuckers.
Bombs away.

Any way, the ornery little thing has been gone for two weeks now, I have looked all over for her with no luck.
Not even a carcass. I figure she was at least fifteen years old, that is a long time for a cat. For you that have never had an old cat, that is what they do, they take off down the road and find some secluded spot to die on their own terms when they know their time is up.

Damn if I wouldn't like to have that option.
Sweet dreams kitty.
This has been a hard thing to post about, I kinda like little varmints.

Lying media/ government assholes, not so much.
Posted by Phil at 10:50 PM