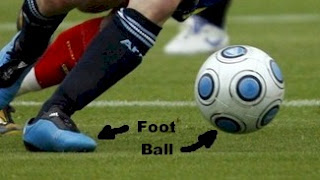 Apparently this "gettin' old" shit is going around. I think I got it, too.

Went and played me some indoor football the other day. For the first time in about 5 years. With kids half my age, for the most part. Damn, I'm sore. I literally rolled out of bed onto the floor the next morning. It was the only fucking way I could get up.

I held my own and I think I even surprised some of the little bastards with how well I played. Heh, they forgot that the old gray-bearded guy with braces on both ankles and one knee has been playing since before most of them were born.

I scared the shit out of one kid, I think. I got the ball near the wall with him behind me and I could tell he was gonna try and nab it by going between me and the wall. Oh, no you don't. I put my foot on top of the ball and slammed myself into the wall to block him. Cut that move right the fuck off. Heard some gasps from guys who thought I had slammed him into the wall but then I heard a couple of guys go "nice" when they saw that I didn't foul him and still retained possession as he ran into my back. I scooped the ball around with my left foot, turned and went around him like he was an orange cone on a practice field. Go lay down, son...you just got worked by 35 years of experience.

Two freakin' hours we played. I was getting cramps in my legs by the end. Been sore all fucking week. Hurt like a bastard to sit down and get up for about 3 days. I'm feeling better just in time. Gonna do it again day after tomorrow. And yeah, it'll hurt for days and days afterwards and people will ask me when I'm gonna stop playing. I'll tell 'em the same thing I always tell 'em...when I walk like this before the game.

Meh, so it hurts. Big deal. Being sore all week just reminds you of how much fun ya had. If you don't believe me then ask OB next time he's been home from Nasty Girl's place for a few days. I'm pretty sure he'll vouch for that.