Here in the Portland Metropolitan area, there has been a serious problem with traffic going between Oregon and Washington over the Columbia river for decades.
There are three bridges currently available to do this.
One was built in the seventies, I remember them building that one, they built an entire freeway with it.

The other two date to the thirties and fifties respectively. 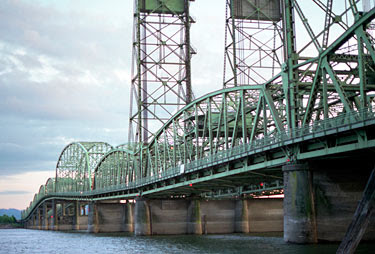 The first of these two old draw bridges was built in the thirties and then they built the twin in the fifties.
There is a serious bottle neck they built after crossing over into Oregon where it goes from six lanes down to two.

Morons were involved, I am positive.

Now, they have been planning a 3 BILLION dollar fix, including a new, giant fucking bridge.
They have spent 140 Million dollars and many years planning it and have gone so far as to pass legislation so they can charge a toll on this as of yet non existent Bridge and freeway upgrade.

What do I wake up and see on the front page of today's paper?

The Coast Guard says it isn't high enough to let tall masted ships clearance to get under.

Let that sink in for a moment.

One business on the river alone told them they needed 125 feet of clearance and the current plan sits at 95 feet.

Morons were involved here too, I am positive.

When I got done reading the article, I was so fucking pissed off I Whipped off a letter to the editor, with out cursing mind you,calling for heads to roll and the local prosecutor to sue for redress.
By their estimates, it would take another hundred and fifty million to raise it up where it needs to be.
As we all know, on a 3 Billion dollar project, there are going to be cost over runs
and I would not be a damned bit surprised after they break ground and start construction to see it double.
This is what pisses me off the most, on a three billion dollar project to build a Mega Bridge across the biggest river West of the Mississippi, someone didn't take the time to think that there might actually be ships going up and down that river.

The incompetence is mind boggling.

Like I said, there are morons involved, I am positive.
Posted by Phil at 12:33 PM