A Freindly Reminder To All The Crazies From The Right Wing 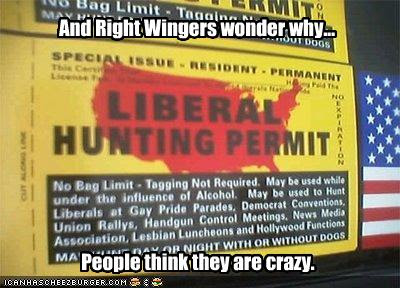 Don't Tread On Me.

This kind of shit really puts you in a bad light but as we have all seen, you think this is hilarious shit until one or two of yer little crazies take it as Gospel.

All of a sudden things got really quiet on your end.
What can I predict will happen next?
Damn, I'm too late, You fuckers have absolutely no accountability for anything and I for one, am done with that.
You have been accosted with the fact that you have been exhorting the crazies that you call your base, you give them money, you provide logistical support and you stand back and deny any responsibility for the actions of any one who actually takes action on any damn thing that you have been hammering on in your bought and paid for media monopoly who is stupid enough to take what you push 24/7 a day.

You dirty sonsabitches own this, lock, stock and barrel.
What really takes the cake is that you try, constantly, to label the reactions to your propaganda as being perpetrated by a "Liberal" Media.
You constantly accuse the very same media you literally own and are on every damn day as being, "Liberal, Lefty News" and you have the fucking balls to do this year after year!

What, you fucking idiots hide Easter Eggs from yourselves too?

Did I jump up and start blaming you for this abhorrent act the second I found out this 89 year old man, an admitted White Supremacist with a Rap Sheet, walked into a federal facility and opened fire after the "News" stated that he was a Right Wing hate Monger?

This is the first time I have said anything about it, I have been waiting for some facts to come out and I have to say, "Mission Accomplished", assholes.


I would remind you of my opening statement.

From what I have been observing for the last year and a half, the Right Wing is self destructing, keep that shit to yourselves and Don't, Tread On Me.

Like I said, I ain't the only one who has had enough of this.

Go see Jurassic Pork's takedown over at Brilliant At Breakfast and Sara Robinson calls 'em out over at The Group News Blog.

Put up or shut up.