Yeah, you, Harold Ford, asshole.
Trying to move your Corporate owned ass to New York because you have done worn out your welcome in Tennessee, Watertiger just stuck a HUGE wooden stake in your dead little heart.
I loves me a Dependable Renegade. 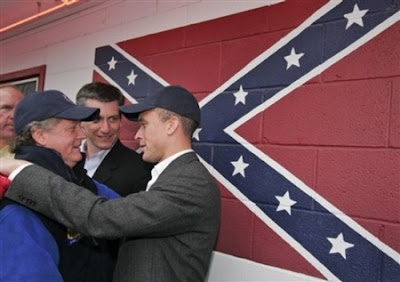 This is a close up reminder of how politicians sell their souls. Harold Ford Jr,

This guy just moved to New york to run for office and when he was asked if he had been to all five boroughs, he admitted that he had been flown over them in a fucking helicopter.
How much of the local politics does this guy know?
He doesn't even know where to order a fucking pizza from.

That is serious business around there from what I hear. What the fuck do I know, I never had the helicopter tour anyways. One thing I can be certain of, my pal Fixer will be all over this like stink on shit, because that is what it is and he is very astute. If I have to say,I wouldn't want to see that guy in my rear view mirror if I just happened to be some arrogant fuck with ties to the banking industry flying around looking for a slice and a spot at the Congressional gravy train out of no where.Between Watertiger and Fixer, Little Harry is in for the Grand Tour.
Sic 'em.
Posted by Phil at 10:40 PM