Want To Help Valerie Get Even? 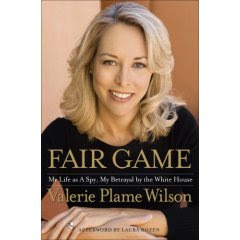 I do, and I did.Valerie Plame Wilson and her Husband Joe have been put through the wringer by the Troglodytes in Charge.
Their lives have been ruined, their reputations trashed and have had threats to their family by Al Queda because one fucking guy couldn't handle truth being spoken to power. One fucking guy.
That fucking guy would be Vice President Dick Cheney.
Because Joe Wilson had the balls to write an Op-ED debunking the Whitehouses false claims that Iraq had tried to buy Yellowcake Uranium from the African country of Niger.
The rest is history.
The Neocons went fucking apeshit and no less than four current and former Whitehouse employees leaked Valerie Plames undercover job status at the CIA to the media at Cheney's direction.Four and a half years they were in the meatgrinder, with the full weight of the United States Government and all of its resources aimed directly at them in order to ruin their lives.
Valerie has a book out, brand new, telling about the emotional horrors and all of the other nightmare things that has happened to them.
The CIA would not let her publish the book without heavy redactions, up to 10% of the book has been blacked out, including her work date history, which is in the public domain already. They fucked with her every which way from Sunday. She said fuck it and published it anyway.
Good for her.
When I found out last Friday that she was going to be at Firedoglake to talk about her book and answer questions, I got off my ass and called Powells Books in Portland and put a hold on the last copy they had in captivity, in Beaverton.
The release date wasn't till today, but they had one.
They finally called me Saturday evening to confirm they had it and Sunday I drove sixty miles round trip to get it. I went home and sat down and read it in one sitting.
It tells an amazing story about an amazing lady and the troubles she has had with the fucking pukes running this government.
I highly recommend it and you will be doing a small part to help them financially, which the government made damn sure they got fucked on too.
So go buy the lady's book. It's a good read.
You can order it from Amazon, which is probably your best bet until it gets a wider distribution.
Posted by Phil at 3:30 PM