If you are over forty, you will understand what this means... 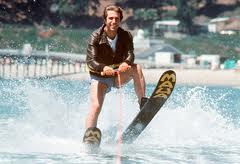 It is known as "Jumping The Shark".
As in doing something so desperate in public for attention that you have just ended your career doing it.

Welcome to that club and goodbye Mr. Santorum.


"I don't believe in an America where the separation of church and state are absolute," he told 'This Week' host George Stephanopoulos. "The idea that the church can have no influence or no involvement in the operation of the state is absolutely antithetical to the objectives and vision of our country...to say that people of faith have no role in the public square? You bet that makes me want to throw up."

I have no problem with people who have faith, just keep it out of our political process.
That is one of my pet peeves with these outspoken motherfuckers who hide behind their religious beliefs but what REALLY pisses me off is when they want to cram their religious fervor and misinterpretation of what the original intent was to the point of absolute disinclusion of anyone who doesn't have that crazy eyed fervor that they so demand to be included.

Here we go again with these fucking cretins and their ABSOLUTE lack of comprehension when it comes to ANY fucking amendment to The Constitution of these United States of America.


The First Amendment (Amendment I) to the United States Constitution is part of the Bill of Rights. The amendment prohibits the making of any law respecting an establishment of religion, impeding the free exercise of religion, abridging the freedom of speech, infringing on the freedom of the press, interfering with the right to peaceably assemble or prohibiting the petitioning for a governmental redress of grievances.

Originally, the First Amendment applied only to laws enacted by the Congress. However, starting with Gitlow v. New York, the Supreme Court has applied the First Amendment to each state. This was done through the Due Process Clause of the Fourteenth Amendment. The Court has also recognized a series of exceptions to provisions protecting the freedom of speech.

The VERY FIRST amendment sets this issue straight immediately and yet Frothy Mixture says that the guys who spent years framing this document after countless meetings and debates doesn't matter because this is like, 1312 dude, in his feeble little mind.

Go puke your guts out you stupid fucking idiot, keep making yourself sick and get busy getting ready to be castigated and shunned.

Something I am positive Mitt Romney understands.

It's a socio/religious method of getting rid of people they deem to be undesirable in their community.

I do believe you are going to find that the larger community known as America , the land of the free, is getting ready to show you the entrance to a dock with a set of water ski's and a Great White waiting to get jumped.

Personally, I hope you miss, you ain't the Fonz, ahhhhhhy?

Fuck you dude, yer a certifiable moron.
Posted by Phil at 10:33 PM

Labels: Fuck You, Religious Zealots, Shit that pisses Me Off, Shut Your Fucking Pie Hole, Sick MotherFuckers, Wiping Yer Ass on the Constitution