For those who use Firefox as a browser, you need to pay attention to this!

There is a spyware company in Britain that works for the government there that has a program that can allow the monitoring and remote use of your computer that is disguised as Firefox.

Mozilla Takes Aim at Spyware That Masquerades as Firefox

Mozilla’s lawyers are sending a nasty gram to a U.K. company that writes spyware for government snoops.

The problem is that FinSpy masquerades as FireFox on the PC, according to researchers at The Citizen Lab, a University of Toronto-backed project that investigates technology and human rights.

Mozilla says it’s sending the U.K. company that makes FinSpy, Gamma International, a cease-and-desist letter later today “demanding that these practices be stopped immediately.” Gamma International couldn’t immediately be reached for comment. FinFisher is the name of Gamma’s command and control server software that collects the surveillance data. It also makes FinSpy, the spyware that runs on the PC.

Gamma International markets its software as a “remote monitoring” program that government agencies can use to take control of computers and snoop on data and communications. In theory, it could be legitimately used for surveillance efforts by crime fighting agencies, but in practice, it has popped up as a spy tool unleashed against dissident movements operating against repressive regimes.

Citizen Lab researchers have seen it used against dissidents from Bahrain and Ethiopia. And in a new report, set to be released today, they’ve found it in 11 new countries: Hungary, Turkey, Romania, Panama, Lithuania, Macedonia, South Africa, Pakistan, Nigeria, Bulgaria, and Austria. That brings the total number of countries that have been spotted with FinFisher to 36.

They found that when they right-clicked on the executable that contained the spyware and opened up the Windows “Properties” dialog box it contained information that was often identical to Firefox.

I originally found this at Boing Boing but their link goes to Wired.com.


From the link about the report in the Wired article, I got this;

I used Firefox for years and loved it but I switched to Opera a while back. I still have Mozilla Firefox installed on my computer but it has been on there a long time. I'm certainly hoping that my Anti Virus programs would have caught this FinFisher program if it had tried to download its self in the mean time.


The way to tell the difference is at the top of the window when you right click and go to properties. 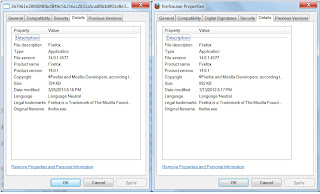 I hope Mozilla sues the living dog shit out of these sonsabitches and puts them completely out of business.

My thanks to both Boing Boing and Wired.com for spreading the word.