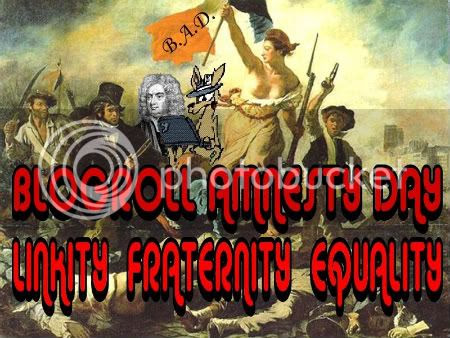 Yes, B.A.D. has come once again.
I try to participate every year because for one, it is the right thing to do and two, I can remember when I first started Blogging and the frustration of getting zero traffic OR comments for a long time.

I can also remember when Good Ol' Skippy put me on his Blogroll.
That was a huge thrill. Skippy was the first big name Blogger to add my humble little rant hole to his extensive Blogroll, put up a link to me on his Blog and the rest is history.
I haven't shut my fucking mouth since.

The origins of this little exercise are a lesson in back stabbing that caught a lot of people by surprise and pissed even more completely off.

The short version is back in '07, DKOS and ATRIOS decided to slash their blogrolls of all the little blogs that were on their Blogrolls and all hell broke loose.
I ain't linking to either one of those dickheads.
This is where Skippy and the late AL Weisel step up to the plate for all of Blogtopia. (Y!SCTP)


"...in blogtopia, and yes, we coined that phrase, the coinage of the realm is linkage. and versa visa. the only way to give value to your peers is thru links. and a spot on your permanent blogroll is the highest value you can give.

so, in spite of the protestations that it's "nothing personal," it's quite literally the opposite: you cut a blog from your roll, you are stating to your readers that you don't find that blog of any value. that cut blog is no longer your peer."

Skippy and Al have between them, helped give much needed traffic and exposure to literally hundreds of Blogs.
I consider Skippy to be my Blogfather (I coined that one!) and will never forget what his linkage did for me.

So here is the deal and anyone can play.

to begin this year's festivities, we'll let our other partner in this endeavor, Blue Gal, introduce some ground rules:
small and newbie bloggers please be aware of the ironclad rule that you are not allowed to make "hey no blog is as small as mine" jokes regarding blogroll amnesty day. the rule is, straight from the queen of the indy blogs herself (ahem), that you are not allowed to complain or mention your blog's low traffic until you have been posting daily for a year. if you're little, link other blogs that are new or still growing their audience, and encourage them to practice their craft daily. then, show them how.

truthfully. not only is the "there are no blogs smaller than mine" joke unoriginal, it's not funny, and is seriously whiny. unless you have a blog with literally zero traffic, which means that even you don't bother to read it, then you can bet there are blogs with traffic smller than yours. be a mensch. find them. link to them. help each other out.

one two more favors: you may write this post any time during this four-day festivus, but when you do, please forward a link of it to us, and we'll happily include it in one of several posts we'll be doing all thu-out the celebration.

also, if you would be so kind, please include a link to this very blog post in your own. last year we actually got a headline @ memeorandum (here), and, truth be told, we're itching for another.


That would be a link back to Skippy.

Without further ado, as they say, here is my list of five.

BJ is a hoot.
We seem to have very similar tastes in what we find humorous, the sick bastard.

The Ultimate Answer To Kings.

Joel is a real live crusty old desert hermit, he built his own place to live and chronicles his daily struggles and his decidedly outspoken opinions. All with one leg. He recently found out he has glaucoma too but he is one stoic sumbitch and I say that with all due respect.Tougher than beef jerky, that guy.
He rocks in my opinion and I had the honor of being picked out of a list of suggestions to name his new website address. (Joel's Gulch)

Herlander Walking.
Syrbal is a fellow Washingtonian farther up North and she is a no nonsense lady with an incredibly developed sense of what is right and what is wrong  and she isn't afraid of anything.
A damn nice lady, just don't fuck with her.She's allergic to bullshit.

Don't ask me, I looked it up once and it's French for something, I can't remember.
Demeur is another fellow Washingtonian and yes, it is just a coincidence.

He is in HAZMAT and is also all over what is going on, he is still even keeping track of how many banks are going belly up!
I like his theory of how to gauge how bad the economy and the unemployment rate is by counting how many cars are in the driveways of his neighborhood during the work week.
Pretty smart, that.


Last but certainly not least, I would like to introduce you to Sixbears In The Woods.
A very interesting fella, this guy.
He lives way up in the North East where it gets colder than a well diggers ass in the winter time, as in minus twenty degrees.
I especially enjoy reading him because he is very much down to earth, used to be a fire fighter at one time even and lives out in the boonies.
Smart as hell and handy like  if it's messed up, call him first.
He even rigged up an old ambulance with a diesel engine to run on used cooking oil!
He and his wife have a small sail boat and when winter hits they bail out and head South and putt around on the sailboat just kickin' it and having a grand old time.
A real nice guy.

Well, there it is.

Once again, I would like to thank Skippy for all he does for us out here in Blogtopia.

If you would like to be added to my Blogroll, drop me a line in the comments with a link and I'll get on it ASAP.
All I ask is reciprocity.
The same goes for Skippy. Just ask and he will add you to his too.

Now go click on those links up there and get busy .Leave them a comment so they will know you were there and tell 'em Busted sent ya.

You'll feel better for it I guarantee ya.

BTW, don't forget that this is basically an archive site. I Blog all the time over at my Wordpress site with the same name.
Leave me a comment and your link here and I will add it to both sites!
Posted by Phil at 1:56 AM