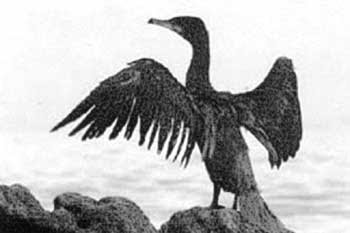 Here we go, everyone over the age of five knows this game, 'It Wasn't Me".
So goes the investigation of just who is responsible for the worst oil spill in the history of mankind.
It was them.
The sonsabitches who are the current crop of sacrificial goats all lined up today in a circular firing squad and pointed their fingers at each other . BP, Trans Ocean and those notoriously dirty motherfuckers at Halliburton.
I have some bad news for you little darlings of corporate America, each and every one of you now have a giant bullseye on your backs, as all three companies are directly tied to the biggest man made catastrophe in history.
Now we are hearing that this giant grease slick is actually FIVE FUCKING TIMES WORSE than we are being told.
By the way, it is still out of control and will wind up in the Mediterranean before this even begins to get under control.
Just wait until the Europeans start getting their fisheries poisoned.

The Gulf of Mexico is already dead for a hundred fucking years.
To this day, twenty years after the Exxon Valdez dumped eleven million gallons of oil in Alaska, there are still fish that thrived there for hundreds of thousand years who have not returned.
There are still oil seeps coming out onto the beaches.
Guess what is going to happen to Louisiana, et al?

I have an idea that those dirty fucking bastards at Goldman Sachs are hoisting pitchers of champagne because when this is said and done, you are going to make the damage they have done look like a Chihuahua pissing on a rug compared to the damage you greedy fuckers are about to be responsible for.

This is a global disaster.
Global, as in Mt. St Helens dumping ash around the whole world, three times.

Global, as in the spent uranium that is now headed to the Continental United States from the spent munitions in Iraq.
You fucking people damn well know how bad this is going to be, you immediately tried buying off the locals for five grand apiece to keep them from suing your asses. One thing I would really like to know, actually, two. Who was the smart motherfucker that came up with that idea, and , do you really have so much fucking money you thought you could buy off every person living on beach front property around the entire Gulf??!!

That's some serious Chutzpa, ya dick heads.
I would have to think, if you think you have that much money, you are going to need it.

That five hundred grand you saved by buying off the sonsabitches who were supposed to be regulating your asses so you didn't have to buy that extra special shut off valve is going to look like a lollipop at the dime store when this is over.
Not having to file the plans for what you would do in this event is really going to catch a bunch of corporate whores too.


This is off the charts when it comes to disasters and you have no idea how to shut it off.

Thirty five billion dollars a year these corporations make, without paying a dime in taxes.

Because Corporations are people too.